The hammam: presentation of a tradition still popular

Origins of the hammam

Already in the 8th century B.C., the poet Homer mentions hot-air baths when referring to the Phoenicians. Hot-air baths have been a hygienic habit of oriental populations since the High Antiquity. Later, the Greeks and Romans endowed them with an important luxury and established them as national institutions, while opening them free of charge to the population in gymnasiums and baths. With the fall of the Roman Empire, hot-air baths declined in Europe but continued to exist in the eastern part of the Empire and in the Maghreb. They were then taken over and developed by the Muslims under the name of hammam. Indeed, Islam incites attentive hygiene. The Westerners then called them "Turkish baths" in reference to the Ottoman Empire.

What is a hammam?

The hammam, also known as a Moorish bath or Turkish bath, is a hot air bath. Unlike the sauna, which is dry, the hammam uses moisture. It is the bath of the ancients, still practised today whether for reasons of hygiene, well-being or health. The hammam consists of a series of vaulted rooms heated to progressive temperatures. Buckets of very hot water are filled in the hottest room. The heat gives the body abundant perspiration and dilates the pores of the skin. It is then easy to massage, rub and soap oneself in a slightly cooler room. Professionals (tayyeb) are at the disposal of clients for this purpose. The session ends with ablutions at will with hot and cold water. It is then possible to rest in a room provided for this purpose while sipping tea.

A bath sheet called "fouta" is used to cover oneself

The hammam is not mixed and you don't bathe naked. Some hammams are exclusively reserved for men or women, while others offer differentiated time slots. In Tunisia, during the week, hammams are reserved for men in the morning and women in the afternoon. These slots are reversed at weekends. Also, for both women and men, a light, thin cotton bath sheet called fouta is traditionally used to cover themselves. The same fouta is worn differently by women and men. 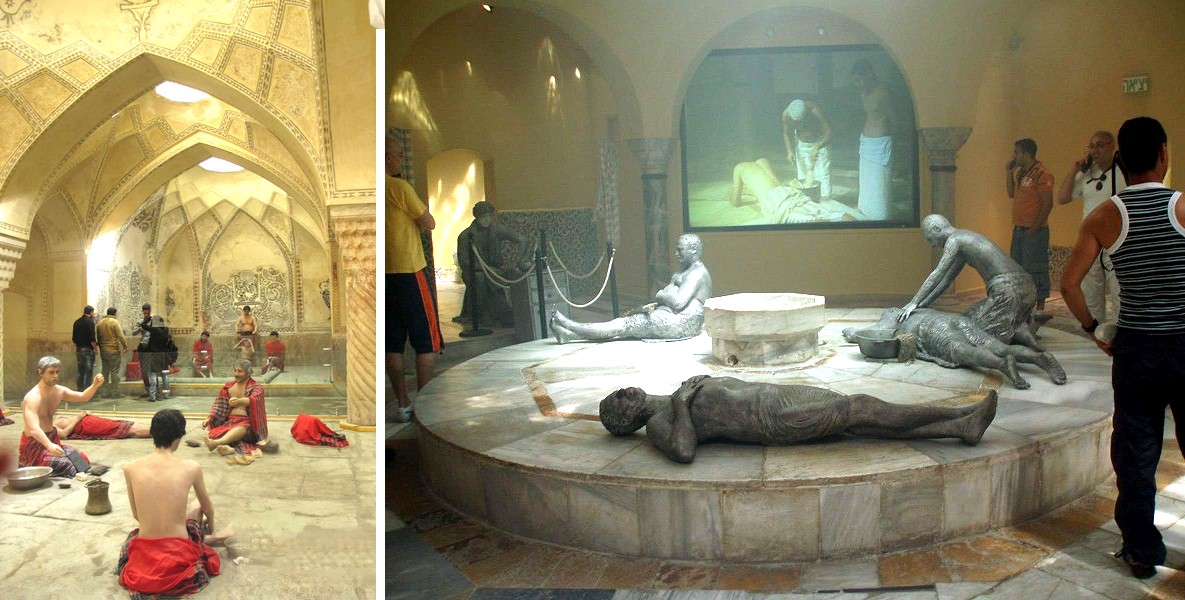 The hammam is frequented by all strata of society. In Tunisia, there are different types of hammams. Very luxurious hammams welcoming a well-to-do clientele have developed; others are simple and rudimentary. As a general rule, the hammam is visited once a week, although some people go more often. In the past, the whole population used to go there. However, since the generalisation of bathrooms in homes, the hammam has disappeared from some countries such as Egypt. In Tunisia, a large part of the population deserts them, but they are still popular and very popular because they provide a well-being that the bathroom cannot match.

In Tunisia, a red door means that it is a hammam (© Chwaya) - Cold room of a simple hammam of Tunis (CC By Aymen FANTAR)